My buddy Adrian and I just played our first Roman Seas game today. It was very, very productive. We ran through pretty much all of the basic rules, to include movement, ramming, grappling, oar raking, missile fire, and close combat. We used the pre-filled ship rosters so not having actual deck combat stands wasn't really an issue. I only regret that I couldn't find my alcohol markers for the roster sheets. We ended up keeping track with pen and paper. Here are a few photos I managed to snap while busy playing, re-reading and discussing the rules.  The numbers on the stands indicate movement rates - which is important for following on moves. 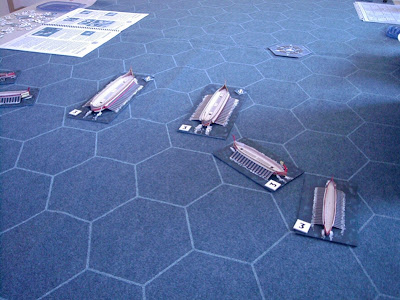 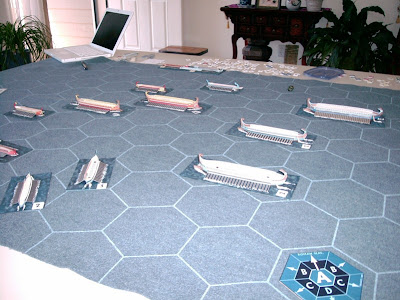 Having played the game with the rule's author, Eric Hotz, in the past really helped. Adrian remembered a few rules clarifications that had come up in his game.

Since the game mat I ordered is the smaller one, we probably max'd out the number of ships - six per side. Which was not a bad thing as we were within ballista range by the first turn. Also, a bigger playing area would've allowed more maneuvering, but for learning the basic rules, this wasn't necessary in my opinion. Much better to get in close right away and try out all the combat rules; as well as subsequent effects such as drifting from broken oars and successful ramming. 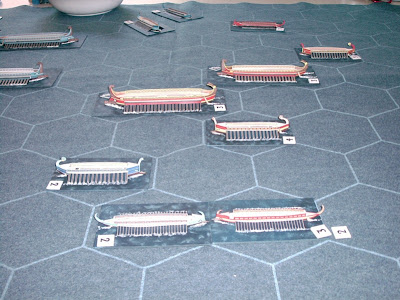 My blue hemoila in the foreground of the photo above successfully grappled the red heoila soon after this ramming. 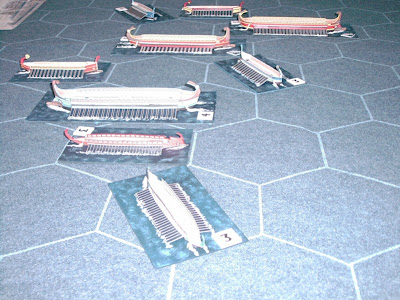 One thing we kind of agreed upon was that for 1/300 scale models - as these are - a large surface area would be needed for larger scale battles. I'm considering going to something like 1/1200th scale with smaller hexes. We did agree that we really like the rules and will definitely be playing this again soon - and often.