Picked up this Testors 1/48th scale P-51 Mustang from Hobby Lobby for under $10 using their 40% off coupon. It's a plastic diecast model that is quite perfect for wargaming. It's durable and even comes with a stand which the plane can rotate on. 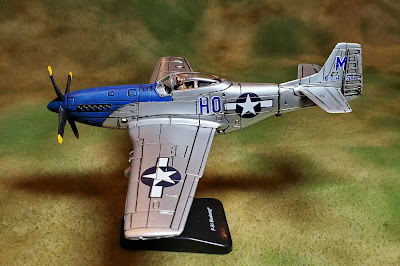 The Air Corps Forward Observer is an old Easy Eight tanker with a head swap from the Warlord Games 8th Army set. The radio operator is a Victory Force Miniatures figure. 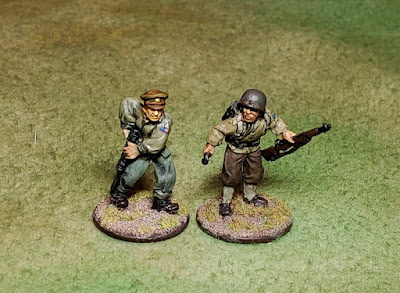 The plane is pre-painted and uses pins and screws to put together. I painted the figure and interior of the cockpit. The panel lines of the plane were given a pin wash, and the blue nose paint was dry-brushed as well. 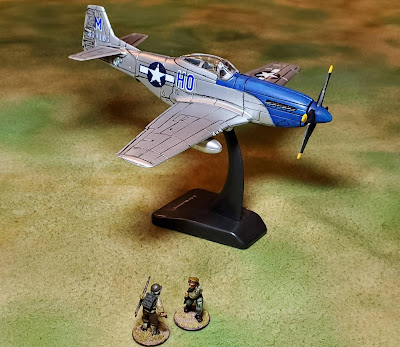 This is what it could do if it successfully made an air strike - and making it past flak. 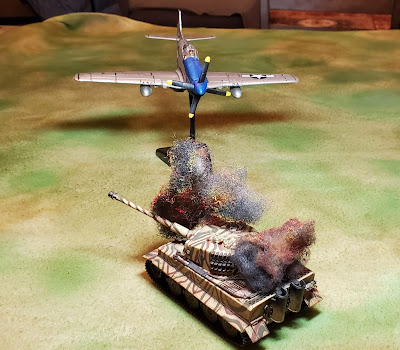 This is the box as it came from Hobby Lobby. 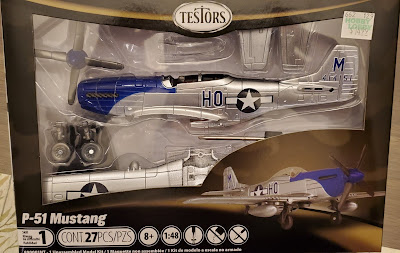 And here's the FAO with the head swap. Oh, and I raised the position of the pilot using Green Stuff - after cutting and prying him off the seat. 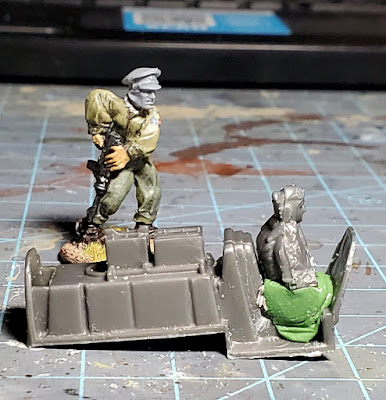 Thanks for stopping by and wishing a very Merry Christmas!
Posted by DeanM at 5:59 PM 36 comments:

Kind of a bookend to my previous post. I felt obligated to do a headcount of weapons which have the potential to take out tanks. 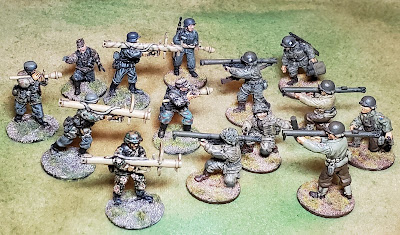 Per the rules, Bazookas have +5 Pen, and Panzerfaust and Panzerschrek have +6 Pen. They all have  the Shaped Charge special rule which ignores the long range penalty. Panzerfaust can only be used once per game. Tigers have 10+ Damage; Panthers, Panzer IV's and Shermans all have 9+ Damage.

I'm hoping to get a Tank War game in before the year is over. Until then, best to you all during the holiday season.
Posted by DeanM at 7:35 PM 26 comments:

Tanks for the Memories - Closing out 2019

Thank you all for stopping by my humble blog in 2019, and leaving such nice comments. I truly appreciate the sentiments and feel a bond, albeit virtual, with all of you. On the gaming scene, and in a slightly altered state of mind due to a few glasses of wine and other spirits, I ordered a copy of  Bolt Action Tank War. While awaiting its arrival, I figured I'd do a headcount of vehicles.These are all 1/50th-1/48th scale; mostly Corgi and New Millennium diecasts, a few Tamiya kits and a couple of Solido armored cars. 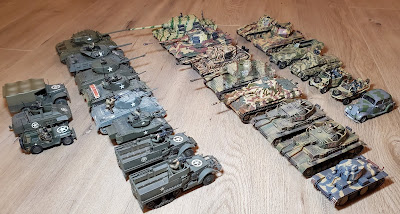 The Americans are outgunned, but I hope to add a P-47 or P-51 for close air support. 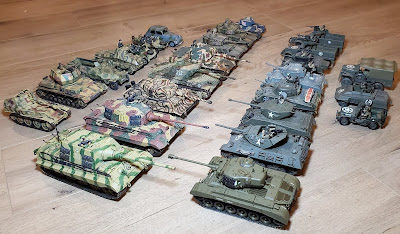 Thinking about an Operation Cobra scenario which will preclude the Jadgtiger and Pershing, but the rest of the vehicles could be used.
Again, thank you all for another great year of hobby blogging. Your continued visits and comments really mean a lot to me and I sincerely apologize if I've missing any of the post on your blogs. In any case, wishing you all the best this holiday season and a very Merry Christmas!
Posted by DeanM at 10:24 PM 36 comments:

With the kind assistance of several local gaming buddies, I was able to finally get a play test of the Western Desert game using the 2nd Edition Bolt Action rules. 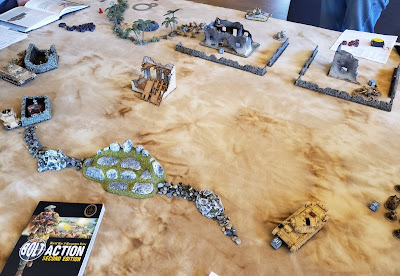 I came up with a simple scenario taking place near the end of the 2nd Battle of El Alamein with the DAK attempting to retreat off the table. We played six turns with the DAK failing to get any of their units off the table. However, they managed to kill of a unit of 8th Army infantry and immobilizing their Crusader tank early in the game. The game was declared a draw after turn 6. 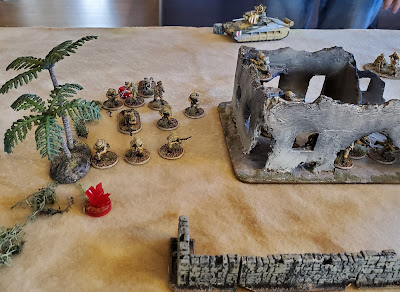 8th Army troops, including a Matilda tank securing the right flank of their front. 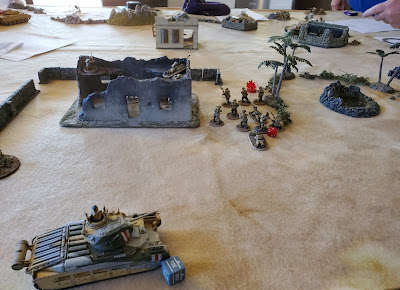 One of the British squads was killed off by DAK marksmanship emanating from the bunker in the distance. 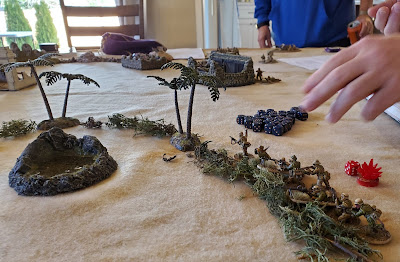 DAK infantry trading shots with 8th Army troops at the "Bloody Oasis".
Rommel in a bunker keeping track of game turns. Although not making it off the table, the Sd.Kfz. 222 did well. First it frustrated the Crusader's firing by using it's Recce evade move out of line of fire. In subsequent turns it used it's auto cannon and MMG to good effect on Indian troops. The Panzer IV, which could only fire HE, ended up with 6 Pins near the end of the game and did not play a big part in the battle.

All in all it was a fun game with a lot of rules discussion both during and after the game. A key rule we failed to use was the adding of Penetration of HE to Damage of infantry - we only used it against vehicles. Anyway, happy to have gotten the recently completed figures and vehicles bloodied and with such good company. Until next time, happy gaming and painting to you all during this Holiday period.
Posted by DeanM at 3:51 PM 24 comments:

Not a gaming post, but somewhat of interest for Napoleonic fans and/or philatelists. Found these old stamps while rummaging through old stuff I collected as a kid. 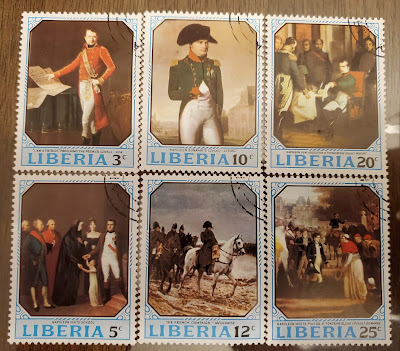 On the actual gaming front, I am scheduled to host a Bolt Action Western Desert game this coming Friday. Until then, wishing you good gaming and painting.

EDIT: I found out (via Google) that these were issued to commemorate the 200th anniversary of Napoleon's birth. Still unsure of the connection to Liberia though. Oh, and I see they're valued as a set at a whopping $1.80 on ebay. :)
Posted by DeanM at 8:18 PM 18 comments:

A bunch of us gathered at Bruce Meyer's place this evening for a large Dragon Rampant game. For the record, Bruce is the owner/proprietor of Company B Models and Miniatures. Due to the large number of players and table space, we were all limited to 12 points, so mostly 2 unit warbands, but still a lot of action.
My first few turns ended with failed die rolls to move. This actually saved my units to partake in the latter part of the game in which they destroyed two units - at the cost of losing both of my units near the end of the game. The game mechanic of having both units which take casualties after combat can and did result the destruction of the winners of the combat. 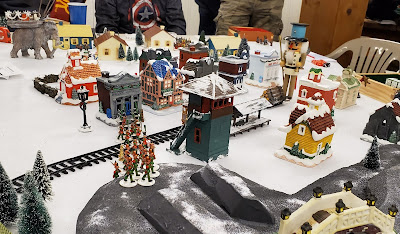 A lovely warband of Toy Soldiers run by Gary W. I wasn't near his action, but they seemed to do well as they survived until the end of the game. 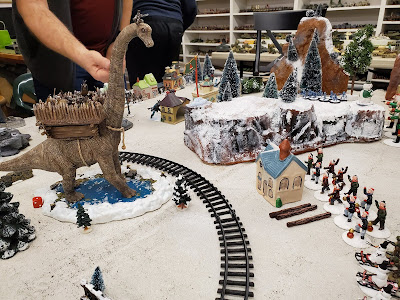 The Dino-beast took a lot of hits from the Snow-ballers. I added a hit or two on it also, but it managed to survive too. 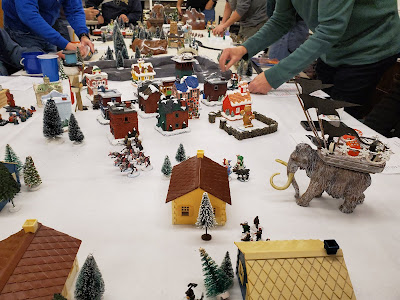 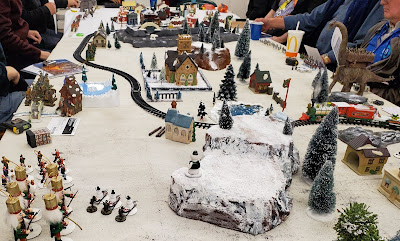 And Rudolph laying waste to all comers. 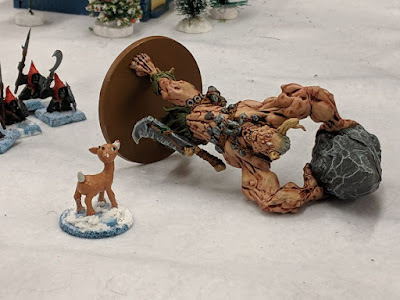 Some gratuitous shots of Bruce's game room and some of his extensive collection of figures and models. 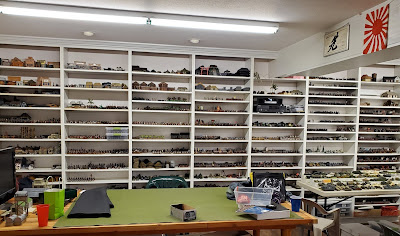 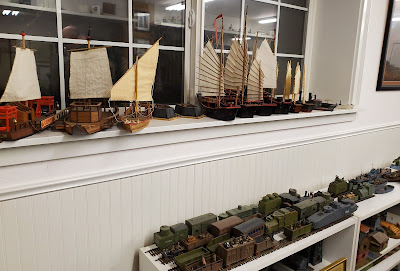 A nice way to round out the work week (although I'm already off on Fridays). Best wishes and Happy Holidays to you all!
Posted by DeanM at 10:23 PM 18 comments: