Tomorrow my buddy Adrian and I will play our first Roman Seas game - first time without the rule's author, Eric Hotz, running the game that is. Both Adrian and I were fortunate enough to have played in a game or two at past Enfilade! conventions. At the time, Eric hadn't even released the rules - he wanted to ensure the rules were well-written and defined before going to print. I think he's accomplished this. I actually went pretty hog-wild when I first got the PDF rules several months ago; building more of the PDF ships than my 4' x 6' mat can fit. Once I get the hang of the rules, I'll likely order another mat to have an 8' x 6' playing area. 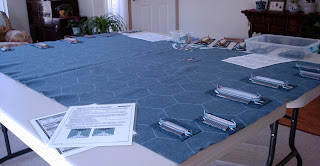 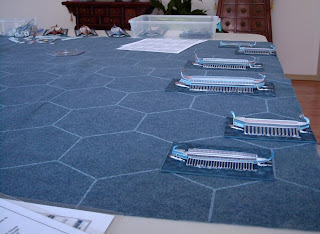 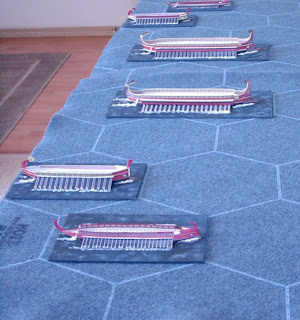 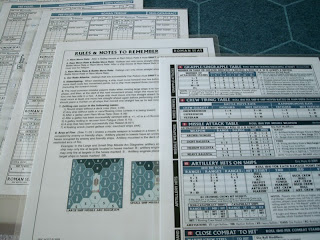 Anyway, here's what I set up today - we may rearrange it tomorrow once Adrian gets here. I'm only planning to use two each hemoila and liburnian vessels, and one each trireme and quadrireme per side. Holding off on the bigger ships, the quinquereme and hexeres; as well as several more hemoilas and liburnians (beg pardon is these aren't the correct plurals). I printed out the pre-filled playsheets for these ships; and although we won't have actual deck troops, we'll simulate and keep track of them using the sheets.
Posted by DeanM at 3:41 PM