The Aventine crews are ready to be mounted on their elephants. The photo below shows the crew for the two-man tower - it consists of  the mahout and one spearman from crew pack C001, and a spearman from C004. The spearman from C004 should have a pelta in his upraised left arm. I may add it later. 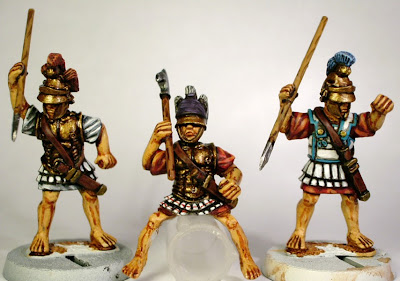 The figures are superbly sculpted, and the armor is particularly well-detailed. The muscled-cuirasses have every detail you would think of - from the actual muscled sculpture to the hinges at the shoulders and breast and back plates. The linothoraxes are equally well-detailed and beautifully made. 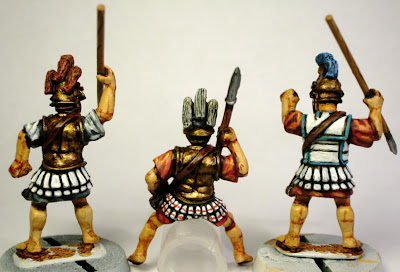 The next photos show the crew for the three-man towered elephant. Three of the figures (including the driver) are from C003, and the bowman reaching for another arrow is from C005. I actually only ordered two crew sets, C001 and C003, but Keith threw in the samples from the other packs.

Hope to have some pictures later of them in their respective mounts.
Posted by DeanM at 11:04 AM