Thanks to my buddy Scott A. who brought his Dark Elf army, and mentoring from Pat L. (Socal Warhammer), I was able to get familiar with Warhammer Fantasy Battles. I do have some experience with Warhammer Ancient Battles, so it wasn't too hard to pick up the basics. What was very interesting was the Magic Phase - it really did some damage to both of our armies. Prior to the start of the game I took a few gratuitous pictures of my Empire army to date - the Imperial Griffon wasn't used in the game today, though. Scott only had about 1,300 points of Dark Elves, so being a gentleman, I only used 2,000 points of my Empire guys :)! 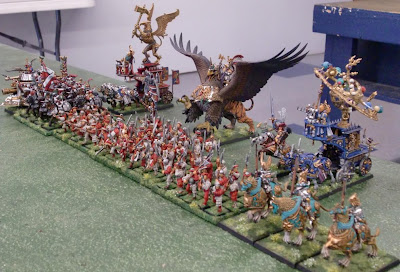 In the staged photos, Volmar the Grim is on the War Altar and a Light Wizard is on the Hurricanum. For the game, I used Volkmar as the Battle Wizard. 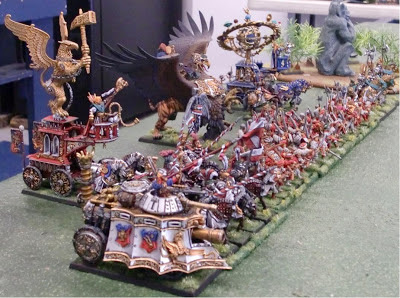 I finished the Engineer Commander for the Steam Tank this morning, before the game. He did very well as the Steam Cannon and Steam Gun did pretty good shooting. It was great getting familiar with the Steam Points rules. The cannon fire was the same as that as in WAB, which I used a lot with my Late-HYW French army. 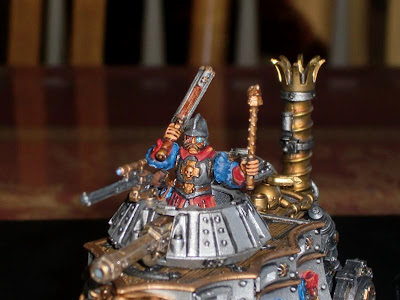 The game itself was very close, although Scott's army was about 700 points less than mine.As usual my tactics left a lot to be desired, but I wanted to concentrate on learning the Magic Phase and other minor differences between WAB and WHFB. Not much really, but still a few things to remember and get better at. The photo below is from Turn 4 or so, my army pretty much bunched up on my end of the table. The Dark Elves are a very shooty army - practically all of Scott's units had crossbows which could fire twice! At the start of the game, a unit of Shades flanked my right and later started crossbow double-tapping my Order Knights. If it wasn't for the knights' great armor save, they would've been decimated quickly. 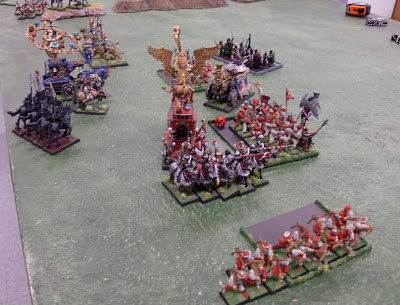 The shot below was kindly taken by our buddy Rod who stopped in all the way from Forks. It shows my Demigryphs rotating around in circles trying to get into contact with those pesky Dark Riders! 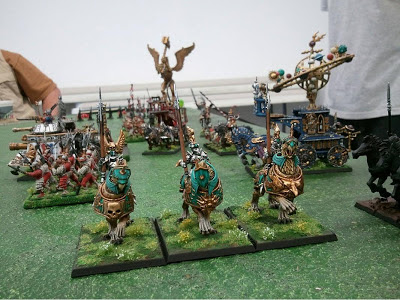 No complaints though - I was happy to see both my Order Knights and Demigryph Knights survive multiple missile attacks. My BSB was killed off by a Magic attack, but the War Altar charged into Scott's Corsairs and broke them off the field. The Hurricanum did well enough, it provided some weather attacks and survived. We played 6 turns and feel we both learned a lot, particularly with Pat's mentoring and coaching. We plan to play again next Saturday. I may even get a practice game in prior to as there is a Games Workshop store right down the street from where I live.
Posted by DeanM at 5:46 PM