Hosted a last-minute Sharp Practice game today at The Game Matrix in Lakewood. Damond Crump had expressed interest in playing as he has the rules but no figures ready yet. Per an email from him yesterday, I met him and his buddy Bruce (not Bruce D. nor Bruce M. - wow, another one), as well as Owen at The Game Matrix at 11:30 this morning. Owen had posted something on TMP last night and I mentioned the game - the power of the internet; thank you Al Gore. Before I go onto the game, I want to mention a huge fire still going on next door to the store (it's now after 4:00pm). The first fire engines arrived as I was setting up the table - about 11:30ish. While we were playing our eyes were watering from the smoke coming into the store. Damond was having a little trouble breathing so we called it quits a little after 2pm. Kevin Smyth, Mark Waddington, Bruce M., and a bunch of others were still in the store heavy into a game. I mentioned to them on the way out that the road block may be in front of the store soon. My eyes are still burning and my car smells like smoke. 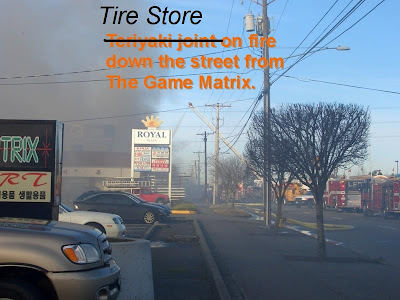 Picture of the fire when I left around 2pm. I mistakenly captioned it as a teriyaki place as that's what I thought some folks said was burning, but the news at 4 is now saying it was a tire store and the reason it won't go out is possibly because of tires stored in the back. The "...TRIX" on the sign in the left of the picture is "The GAME MATRIX" sign.

Now, onto the game. The same scenario Dan and I used at The Museum of Flight  game day was used. Basically, two French units in garrison and two British units coming on board on blinds - including dummy blinds. 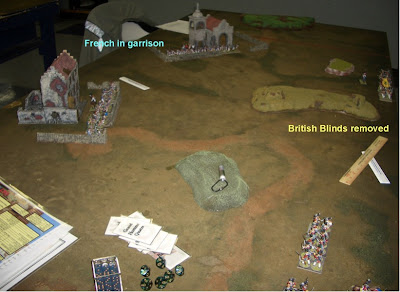 Owen chose the French and Damond and Bruce played the British. Owen was very aggressive and moved his French out of the confines of their respective garrison cover. He then used his Big Men to spot blinds. Eventually, the British position was revealed to be concentrated on the French right. 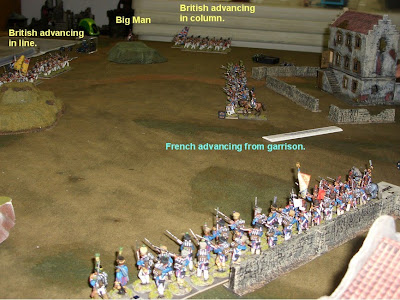 Bruce was equally aggressive and moved his British into musket range. He was the first to get rounds off - and did fairly well. Owen came back just as good - in fact, as Bruce discovered later, too good. I had somehow left out his (Bruce's) Big Man 3 and 4 cards. Only when he asked why this would be was it discovered. I bet he's a good poker player too. 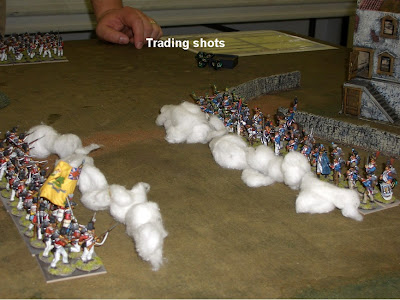 Owen later moved his French left up to the hill in front of him. However, before he could move them to the far edge of the hill to flank Bruce's unit, we were smoked out and had to leave. 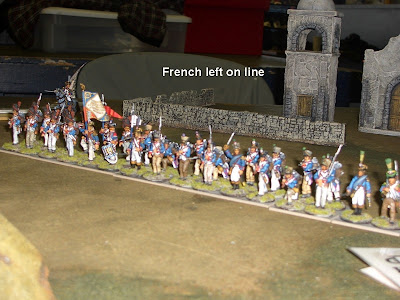 Being only my fourth or fifth game, it was great to play it with new players who provided different views of the game mechanics. One thing we discovered, and agree upon, was that the "biggest" Big Men shouldn't always be attached to formations. We think having them in command radius is a more effective use for the "littler" Big Men in the formation. The best use of attached Big Men is to remove shock with their higher status levels. They're not really needed to get the unit activated for movement or firing - the "lesser" Big Men, especially with musicians, can get the unit to do these things. Anyway, I'm even more stoked to play these rules again. I'm actually motivated to paint up more figures - once I get the Perry heavy cavalry and infantry sets done, I'll have to pick up a box of Victrix Highlanders.
Posted by DeanM at 4:45 PM