Okay, only 7 of these guys, but 7 Carabiniers (from the same boxed set) will be added to them for a combined heavy unit. 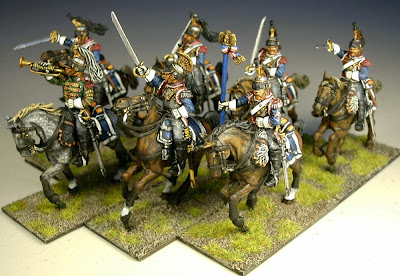 The figures are very nicely sculpted - no surprise being Perrys of course. The flag (included in the box) has yet to be added. However, on campaign these were normally stored and only the eagle and staff were carried. 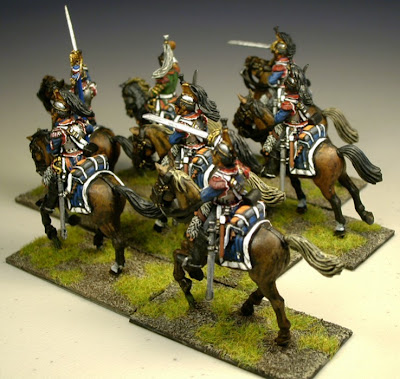 Photos are a bit dark, but hey, it's the best "sun" WA State will have for sometime.

Carabiniers next. Oh, and this unit is the first 2010 "completed" project.

Here is an interesting quote from the British officer who rashly chose to attack French cuirassiers at Waterloo with two regiments of lighter cavalry, "At this point I was pierced through the left side into the lung. Blood started coming out of my mouth, making it difficult for me to speak. I was forced to go to the rear, and I can say nothing more about the action." - Maj-Gen. Sir Dörnberg, commander of the 3rd Cavalry Brigade.
Posted by DeanM at 9:53 AM