Finished basing them today. Used some sand mixed with dried coffee grounds along with some Army Painter winter tufts. 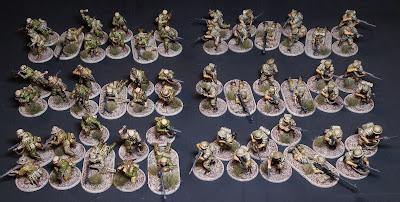 Three full squads per side with anti-tank rifles. Plan to add light artillery and mortars later.

I didn't highlight these DAK guys after the Minwax staining as the base coating was a bit watered down and give a pretty good variation of color.

The British were given a little bit of highlighting - Iraqi Sand over Khaki that had been stained with Minwax.

For the record, I ran the Franco-Prussian War skirmish game using Bolt Action on Saturday at another game day at the Fort Lewis Museum. The game went for 6 turns with the French winning over the Prussians. The Prussians had a Cuirassier and two artillery units while the French had neither. Their victory couldn't be solely attributed to the longer range Chassepots, as the Prussians were overly cautious and didn't take advantage of their superior numbers - 10 units to the French's 8.

Next up are a Panzer IV and Matilda to support the Western Desert forces. Thanks again for dropping by and happy painting and gaming to you all.
Posted by DeanM at 11:06 PM