Added the tiger markings that were used during Operation Ripper in 1951 during the Korean War. Supposedly they did it because they believed the enemy were superstitious and that it would scare them. Probably scary enough facing a 48 ton behemoth spewing 90mm HE, in any case. 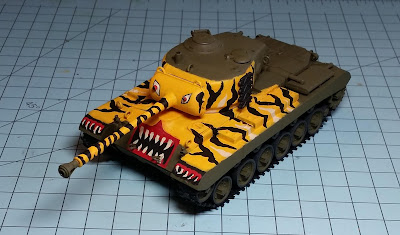 Still need to give it a wash and then some weathering, but most of the main stuff is done. 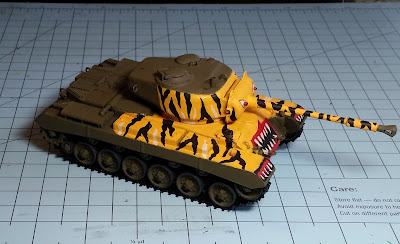 It's a fairly simple kit with minimal parts and sturdy enough for gaming. 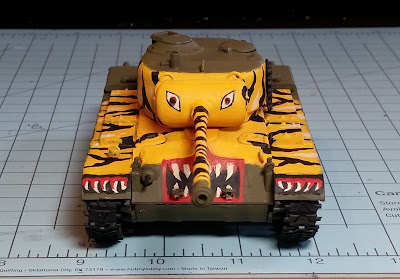 The tracks are flexible and the wheels can spin with the tracks. However, pushing it around like that is definitely not recommended. 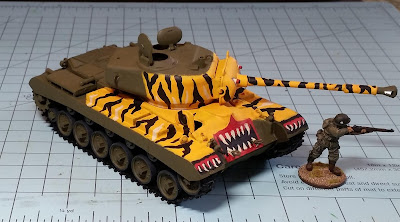 The turret can spin, and the barrel can move up and down. The hatches can also open and close as as well. I plan to add a TC later - the one that came with the kit was very 1950's sculpted - that is, hardly any details. 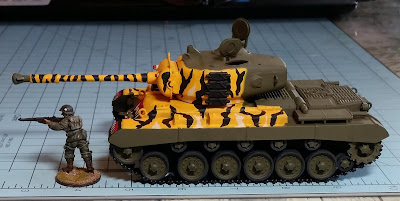 The 28mm Victory Force figure alongside for size comparison. Good enough for me as I like this scale for modelling.

Anyway, just a quick update to this mini-project. In fact, I may put it aside to start on the Warlord Games British 8th Army and DAK guys as the Vallejo paint set arrived. In any case, best wishes to you all and happy gaming and painting!
Posted by DeanM at 4:42 PM