A Pershing and a Couple of Pattons

The two 1:48 kits of basically the same tank are quite close in size - as one would hope; however, the Aurora/Atlantis Patton's hull is slightly wider. Otherwise the two look pretty close overall. The M48, although in a slightly smaller 1:50 looksa bit bigger - mainly taller, which may be the actual reality. 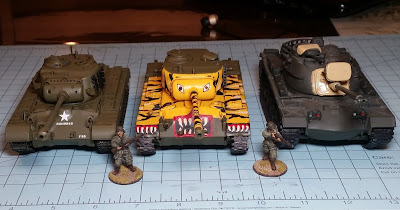 Along with a couple of Victory Forces minis - the lower profiled M26 and M46 tanks seem to work better with 28mm figures.

Their side profile betrays their familial line.The M46 has an added lower bogie wheel before the rear drive wheel. 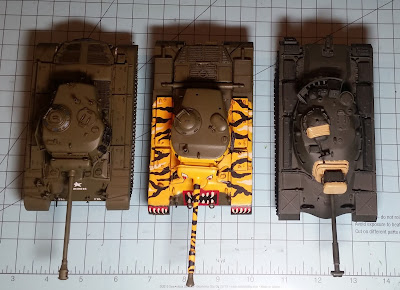 I've yet to decide if I'll weather them; although the M26, unless battle damaged, probably stayed pretty nice as they only entered the war in the final weeks/days of WW2.

Anyway, just wanted to post a comparison shot of these "modern" tanks. Time to return to the British 8th Army and DAK stuff. Thanks for stopping by and happy gaming an painting to you all.
Posted by DeanM at 7:09 PM