Finally managed to get motivated and paint these few figures up. Great sculpts that are very sturdy for gaming. Only six figures as they are intended for Bolt Action skirmish gaming - mainly as supports for infantry. They'll have 3 x Attacks in HTH, no carbines and a Damage value of 5. 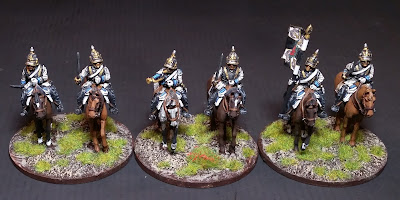 They have nice detailing, yet not overly complicated to paint up. The horse are mostly posed at the walk or standing - which is good as they have all four legs firmly on the base. The Eagles of Empire French Hussars are more delicately sculpted - beautiful as they are, some have only the two rear legs on the base. This creates some handling issues; in fact, I had to add brass rods to some of them for stability. 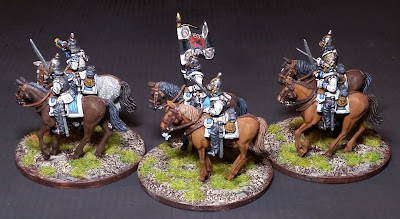 The flag was downloaded from Warflags, and it might not actually be one for cuirassiers, but it looks the part. Edit: I now see that I put the flag on upside down. Lol! 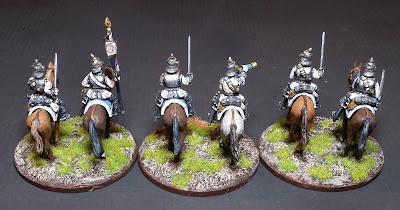 The figures were block painted, then given a Minwax Tudor Satin stain. Highlighting was added afterward. The horses were sprayed painted with rattle cans from Walmart and also stained and highlighted. Quite a quick process to get them on the table soonest. 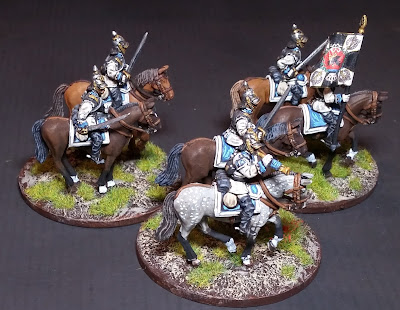 Next up is a North Star 1866 Prussian 4 pounder and crew. I might paint the crew up as Saxons in green coats; just to spice up the battlefield. Until the next post, best wishes and happy gaming and painting to you all!
Posted by DeanM at 7:53 AM