Prepping for a Convention - 3 Months in Advance?!

This may sound a bit early for a convention in May, but I just finished marking positions of major terrain pieces using masking tape placed on the terrain cloth to be used. This way I don't have to worry about trying to remember how to set stuff up during the convention, particularly with sectional terrain like the roads and river. This is for a Lion Rampant game based upon First St Albans - a game played about a year ago. What set me in motion was being reminded by the event coordinator last night via email that I had committed to running a couple of games. 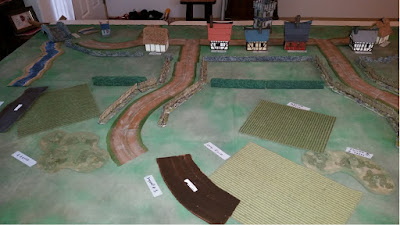 My wife's puppy wanted to know what was going on above her, so I hoisted her up for a looksee. 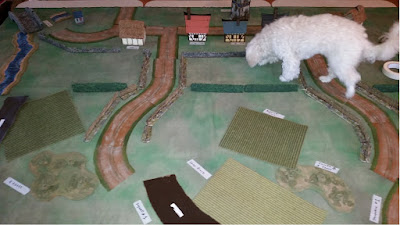 Once everything is put away, I will start on another Empire figure which has been sitting in a box for a few years.